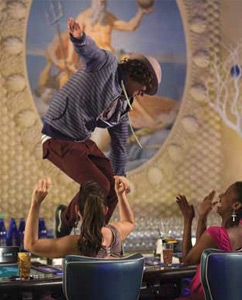 Las Vegas stars in the dance musical, Step Up All In.

The glitter and glamour of Las Vegas provides the backdrop for Step Up All In, the latest in one of the most popular series of dance movies in Hollywood history. Crowd-pleasing young stars from the previous Step Up films unite to tear up Las Vegas with spectacular moves at an array of iconic landmarks, from the fountains at Caesars Palace to the Eiffel Tower at Paris Las Vegas.
But why Vegas? Producer Jennifer Gibgot, who with her brother Adam Shankman, created Step Up, says. “It’s a playground, a place where you go and just let loose.” Filming [in Vegas] was like one big party.” “Vegas is one of a kind,” adds director Trish Sie. “It’s a mecca for entertainment and has great restaurants. It’s a place where everything is happening.” Step Up All In centers on stars Ryan Guzman and Briana Evigan, who play dancers betting their future on winning a fight-to-the-finish TV dance competition. Shankman, who began his own very successful Hollywood career as a dancer, says, “It mirrors the hopes and dreams of wanna-be dancers, both personally and as the characters they play. Vegas is a place where people come to make dreams come true. It can be your start to stardom.” Step Up All In is driven by the dazzling dancing and breathtaking choreography. The locations for these showstopping routines include the statues and fountains in front of Caesars Palace, and at the Neon Boneyard, an outdoor museum where classic signs from Sin City’s past are displayed. “There was very little the stars didn’t do themselves, unless it was something dangerous,” Sie says. “They were up for it—and that’s what makes it so exciting.” “Our goal was to make people happy and have them dancing out of the theater,” Gibgot adds. “That’s exactly what the crowd of onlookers was doing when we filmed a scene. They were dancing down the Strip. It was like Vegas was busting a move.”