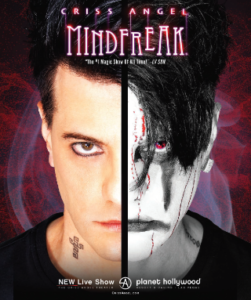 Highly acclaimed magician Criss Angel is returning to Planet Hollywood Resort & Casino with a brand-new Criss Angel MINDFREAK show. The very place where he launched his popular Mindfreak television show in 2005. This time at Planet Hollywood, he’s taking his live show to another level. “It’s the most technologically sophisticated show the world of entertainment has ever seen. I don’t say that boasting. I say that as a matter-of-fact.”