Our interview with Celine Dion as she prepares for her final Caesars Palace shows. 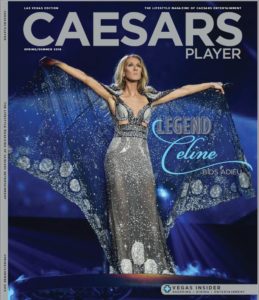 She’s Las Vegas royalty. Sixteen years ago, Celine Dion rolled the dice and opened a residency while in the prime of her career. She not only hit the jackpot with two hugely successful Caesars Palace shows, but also paved the way for other artists who entertain in Las Vegas today.

Just months before the final curtain closes on Celine Dion’s groundbreaking residency at The Colosseum, one she began in March 2003, she already knows how she’s going to feel when June 8 arrives.

“I know that I’m going to be very nervous, and it will definitely be bittersweet,” she said.

When Dion began her A New Day… residency, all those years ago, it was a real gamble. Would this style of residency show work? Would The Colosseum, which was being built for her show, prove to be as magical as everyone hoped? Well, 16 years and over 1,100 shows later, these questions are laughable.

“Sometimes I joke about this on stage, saying that I was only supposed to be here for a few months, and here we are sixteen years later, what happened!” she said. “I honestly didn’t think about how long we’d be here when we first started. I figured a few years, for sure, but I never imagined it being this long.”