Las Vegas native opens a comedy club on The Strip. 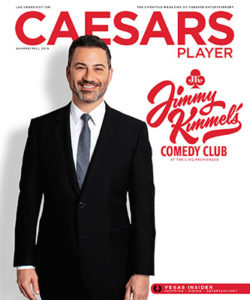 Jimmy Kimmel’s name is now lighting up The Strip on a continual basis, having opened Jimmy Kimmel’s Comedy Club on The LINQ Promenade in May.

“I think any great club has a mixture of people who are getting started and people who are at the top of their game,” Kimmel said, adding that he wants comics to feel welcome to “tune-up” their acts there before heading out to bigger performance venues. He’s also not opposed to comics doing “late night pop- in” shows at the club.

“My job is to make sure that these comics know that that they will be welcome there and that it’s a great place to do comedy,” he said.