Jess Medina Puts the Perfect Fish on Your Plate.

Fittingly, Jess Medina was on a beach when he got the call. At the time, just over a year ago, Bobby Flay was working on a new restaurant concept called Amalfi and he wanted his former prep cook to take on a starring role as fishmonger. 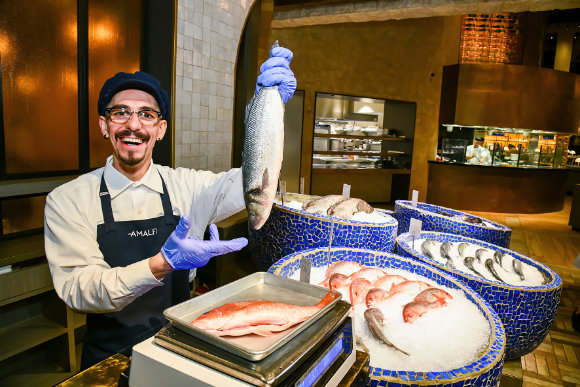 This was a dream job for Medina, who grew up fishing for sturgeon, striped bass and halibut in the San Francisco Bay Area and working in his family’s restaurant in Stockton, California.

“I was blown away. I screamed at the top of my lungs,” Medina recalled. “I love working with Bobby [Flay]. He takes the time to groom you and train you. That’s the reason I came to Amalfi.”

Amalfi by Bobby Flay, which recently celebrated its first anniversary, is inspired by the chef’s love of Italy and the Amalfi Coast. The menu brings those bright flavors from the southern coast of Italy to Caesars Palace with a selection of up to a dozen species of fresh fish, including red snapper, black bass and branzino.

Flown in daily from around the world (from New Mexico and Rhode Island to the Mediterranean and New Zealand), the catch is displayed on ice in large, blue-tiled ceramic basins. Servers direct diners to the fishmonger’s station—the focal point of the restaurant—where Medina will greet them and answer their questions.

“This is a very special thing we offer. Fresh fish to your plate is huge, ”Medina explained. “I’ll give them a tour and educate them on all the different species of the fish.”

On any given day, the fish selection ranges from seven to 10 species. Each fish can be prepared either seared on the plancha or cooked in the oven and served with a choice of condiment: Meyer lemon and capers, red pepper and Calabrian chile pesto or salsa verde.

As a prep cook for Flay, Medina made those sauces so he is able to suggest a pairing for the guest’s preferred fish based on its origin, flavor and texture.

“My favorite fish is the red snapper,” Medina said. “It has a very medium fat content so you’re going to get a buttery texture and then when paired with the Meyer lemon caper sauce—that citrus tang with that sweet red fish—it’s a phenomenal marriage.”

At just 29 years old, Medina has risen from dishwasher to cook to fishmonger. And while a title and role unfamiliar to most and rare in Las Vegas, Medina is glad it’s his.

“Taking risks is very, very rewarding,” he said. “If you don’t take the risk, you’ll never see progress or growth in your life.”