Cronut® creator and dessert innovator Dominique Ansel is on the verge of unleashing his signature sweets to the masses at his new bakery inside Caesars Palace. That means guests will soon be able to bite into the original croissant-donut hybrid that took the dessert world by storm in 2013, while also sampling his other whimsical desserts including the Chocolate Chip Cookie Shot and Frozen S’mores. But the James Beard Award-winning pastry chef also has new innovations planned for Las Vegas. Here’s what Ansel revealed. 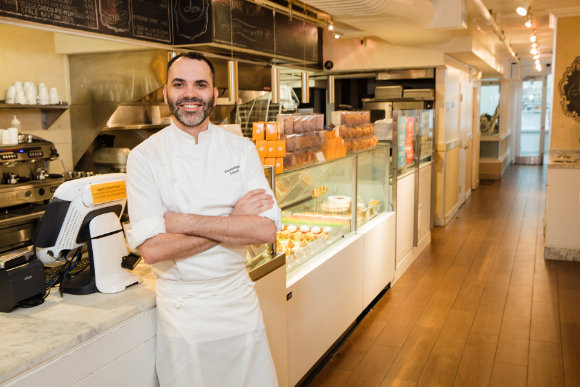 You’ve raised the craft of pastry making to a true art form. What is so appealing about it?

For us, it’s about creativity—being able to take basic ingredients like flour, butter, sugar and eggs and turn them into endless possibilities. It’s about creating memories for our guests. If you think about it, desserts are always a choice. You eat food to sustain yourself, but dessert is something you choose most often because you’re celebrating something. Those are the moments for why we do what we do.

What is the secret to great pastry?

Baking is a science. Everything has to be precise; everything has to be measured. Learning those foundations and understanding the science and chemistry behind the recipes is the first step. Then with some creativity and imagination, and a lot of practice, you can create something special.

You tested several versions of the Cronut® before you hit on the final one. How did you know you had found it?

You’re never really “done” with a recipe. You’re always testing and working on ways to perfect it. The Cronut® took two months to develop and more than ten different recipes until we landed on the final version, but even now nine years later, we’re still tweaking it daily based on the weather, the humidity and the time of year.

Where do ideas for unique treats like the Chocolate Chip Cookie Shot and the Frozen S’mores come from?

We’re always changing our menus, especially seasonally when we’re able to get beautiful fruits and produce in. When the Cronut® first launched, it was a beautiful creation and we were fortunate that people loved it. But I knew I wanted to keep pushing forward and since then, we haven’t stopped creating.

There’s always an occasion to celebrate, or someone special to celebrate with, and we’re happy to be there for those moments and memories in people’s lives.