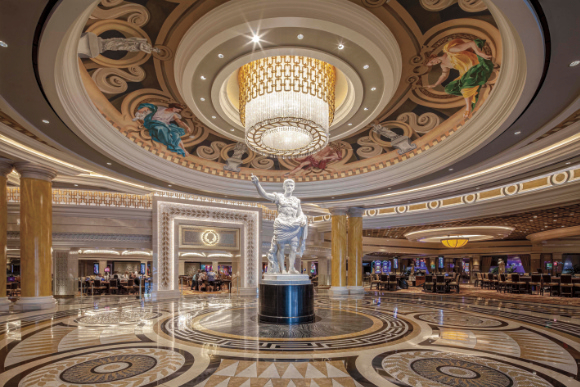 Caesar himself may not have actually lived at Caesars Palace, as Zach Galifianakis’ character Alan in The Hangover wondered aloud, but he would most certainly approve of the new entrance.

The resort recently renovated its original main entrance, the iconic casino dome (seen in several Hollywood films) and the porte-cochère, while refreshing the gaming area and adding a new lobby bar.

By literally raising the roof, the entryway matches the grandeur of the hotel lobby. The redesigned space now features a coffered ceiling with hand-painted illustrations of Roman gods and an eye-catching chandelier that sports 70,000 crystals. A marble mosaic floor and 15-foot-tall Carrara marble statue of Augustus Caesar complete the space.

The new entryway is the first of several additions to Caesars Palace, with Peter Luger Steakhouse, a Dominique Ansel bakery and Stanton Social Prime as the latest additions.

“From the moment visitors arrive, we aim to deliver experiences that can only be found at our flagship resort,” said Caesars Entertainment Regional President Sean McBurney.

A SIGNATURE BAR Another welcome addition is the Galleria Bar just off the hotel lobby. The 24-hour bar, which features antique mirrors and wood murals, has two dozen seats and 22 multi-game slot machines under the watchful eyes of four life-size Venus sculptures.

As for the menu, guests can enjoy wines by the glass from the Coravin® wine preservation system along with a number of signature cocktails. Among them: the Queen of Hearts, made with Casamigos tequila, watermelon purée, lime juice, a pinch of salt, sliced jalapenos and a fresh watermelon wedge; the Wild Orchid, a blend of Ketel One Oranje Vodka, lemon juice and crème de violette; and the Denarius, crafted with Ron Zacapa Centenario XO rum, orange juice, coconut cream and pineapple juice and garnished with a fresh pineapple wedge.