Welcome to Martha Stewart’s home: Vegas edition. The Bedford by Martha Stewart, a restaurant designed by the lifestyle icon, is set to open this year at Paris Las Vegas. Not only is The Bedford designed by Stewart, but it’s also essentially a clone of her actual country farmhouse in Bedford, New York. By Mark Gray 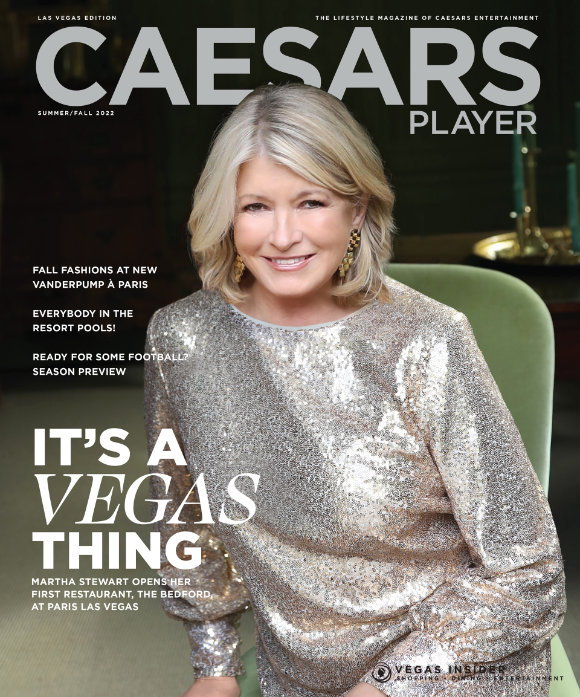 “We wanted it to be a personal kind of place that people would feel comfortable in. People would feel like, ‘Oh, we’re going to Martha’s.’ We had the suggestion of making it kind of a replica of my Bedford house, which is what we’ve done,” Stewart told Caesars Player.

The highly immersive restaurant mimics Stewart’s home with an impressive attention to detail, as it includes white marble counters, stainless steel appliances and gray cabinets, all of which are found in the best-selling author’s abode. The restaurant also features a large dining room, which Stewart notes is “a very accurate and lovely depiction of that brown dining room in my house.”

“It’s kind of fun to recreate my house in the Las Vegas way, and Las Vegas has the best craftsmen. The best imitators in the world are in Las Vegas,” she said. “It’s always impressed me how quickly and beautifully a thing can be fashioned to look like something. Look at the Eiffel Tower for God’s sake. Who else has an Eiffel Tower?”

She continued, “It’s very fun for me to see the Las Vegas machine in operation on this particular project. I’ve had a long relationship with Las Vegas and the blackjack table, where I only lose money.”

Seeing that The Bedford has Stewart’s name on it, she’s leaving nothing to chance, as her fingerprints are everywhere. In fact, the dining experience parallels how the businesswoman entertains in her own home.

“I’ve chosen every single dish, every single fork, every single knife, all the glassware, the linens, everything I’ve chosen,” she said, adding that she is working with farmers, ranchers and other purveyors to ensure her restaurant has only the highest-quality ingredients. “It’s a lot of my personal favorite things.”

Although The Bedford is Stewart’s first-ever restaurant (and she chose Las Vegas), it’s not from a lack of opportunity. As someone who’s decorated casinos for holidays and cooked for hundreds of people at Vegas conventions over the years, Stewart has had several chances to open a restaurant in the desert. None of those opportunities were right; nor was the timing. This new partnership with Paris Las Vegas, though, is incredibly symbiotic.

“My food is based in French food originally. I really learned how to cook using French cookbooks,” she said. “I’ve spent more time vacationing in Paris than I have on any other vacations, so it fits. It just fits.”

The Bedford, which seats about 200 guests, features not only French-inspired cuisine, but also dishes that fuse the humble with the elegant, such as a potato pierogi topped with caviar, a dish that pays homage to Stewart’s Polish roots. Stewart refers to it as “high-low.” Further, the upside-down Lemon Meringue Pie consisting of meringue crust, lemon filling and a whipped cream topping is likely to be a signature dessert at The Bedford.

“We have stuff that’s a little unusual, original and extremely tasty,” she said. “The menu was so much fun to work on because it has my very, very favorite recipes and combination of recipes.”

Of all of Stewart’s celebrity friendships, none seem to be more contrasting than her partnership with the legendary rapper…at least on paper. After the pair first met on The Martha Stewart Show in 2008, fans went wild for Snoop and Stewart’s unconventional chemistry. Soon, the two appeared together on a variety of TV shows and went on to cohost Potluck Dinner Party on VH1 for three seasons (the show even snagged an Emmy nomination in 2017).

“Snoop’s an entrepreneurial spirit and, and so am I. We love to compare notes, we love to teach each other different things. Having a show with Snoop was really fun, and doing all the commercials and different product affiliations has been also very interesting,” she said. “He’s very open and very nice. He’s accomplished a tremendous amount. We talk about our grandkids. We talk about our children. We have a nice relationship, a nice friendship.”

In a way, the friendship is as unique as Stewart’s tranquil home being mirrored inside an action-packed Las Vegas casino.

“Oh gosh,” she said of the farmhouse-Vegas juxtaposition. “It’s so clashing, it’s great.”